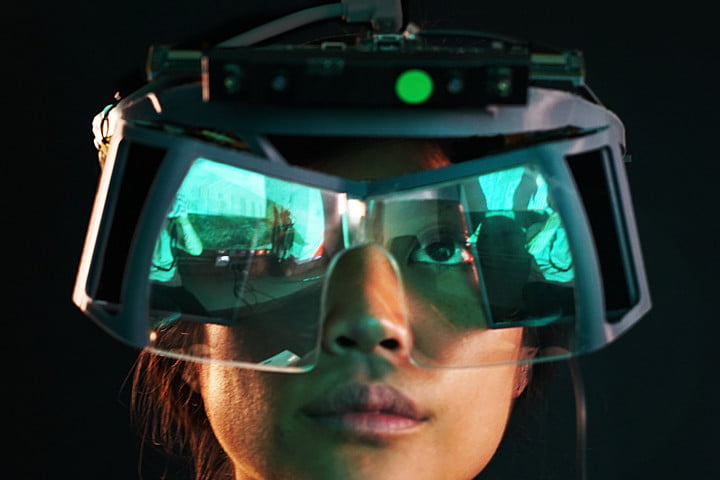 Leap Motion just revealed a new prototype headset that mixes hand tracking with augmented reality. The device, dubbed as North Star, relies on ellipsoidal reflectors, which are typically sections cut from a larger, curved ellipsoid mirror. In this case, the reflectors are based on optical-grade acrylic coated with a thin layer of silver.

For the first version of Leap Motion’s prototype, the company mounted these reflectors inside a huge head-mounted device seemingly ripped out of a 1980s mad scientist movie. On each side of the helmet’s inner wall was a 5.5-inch LCD panel along with bulky ribbon cables connecting to display drivers mounted on the top of the HMD. Needless to say, it wasn’t sleek and compact like Microsoft’s HoloLens.

“While it might seem a bit funny, it was perhaps the widest field of view, and the highest-resolution AR system ever made,” the company says. “Each eye saw digital content approximately 105 degrees high by 75 degrees wide with a 60 percent stereo overlap, for a combined field of view of 105 degrees by 105 degrees with 1440 × 2560 resolution per eye.”

Sound confusing? Imagine putting on a helmet, and inside you see two reflective surfaces curving outward, with one end connecting close to the bridge of your nose, and the other end extending forward and out. Meanwhile, there is an LCD screen mounted to the left and right of your eyes, reflected on the curved mirrored surface. This provides a huge field of view both horizontally and vertically.

Eventually, the team whittled the headset down from a mad scientist contraption to something that looks more like a current VR headset. The prototype now relies on two fast-switching 3.5-inch LCD screens manufactured by BOE Displays that are powered by an Analogix display driver. While it has fewer parts than the previous gargantuan prototype, Leap Motion managed to preserve “most” of our natural field of view.

In its current state, Leap Motion’s prototype provides a 1,600 x 1,440 resolution for each eye — lower than the hulking first-gen model — running at 120 frames per second. It also sports a field of view “covering over a hundred degrees” with the two screens combined. Meanwhile, the hand-tracking runs at 150 frames per second over a 180- x 180-degree field of view.

According to the post, the team pulled the reflectors away from the user’s face just slightly to make room for a disassembled wide field-of-view camera manufactured by Logitech to record the augmented reality headset in action. But they’re still not done — other refinement tasks include better cable management, better curves, additional room for enclosed electronics and sensors, and more.

Once Leap Motion makes those refinements, there are other details that could improve the headset’s AR experience, such as inward-facing cameras for precise augmented image alignment, face tracking, and eye tracking. Head-mounted ambient light sensors would support 360-degree lighting estimation while directional speakers would provide “discrete” localized audio feedback. Micro-actuators could be used to adjust the displays.

Leap Motion plans to release this design to the open source community next week.